Okies! Time to revisit the Dollfie Dream scene!
Today I’ll be showing you some of the newer dollfies that I haven’t really talked about much.
We’ll be looking at the Fortune Arterial, Super Robot Wars and Fate/hollow ataraxia.
Please note, all these dollfies are limited editions, so… Good luck!

Some of you may remember reading about Dollpa, or known as Doll’s Party, an event held by Volks to showcase and sell their new products, and also a place where dollfie lovers can go and sell their own items. You could say it’s a dollfie version of Comiket. For more info you can either google it, or visit some of my earlier posts: Euphoric Temptations and Dollfie Euphoria

First up is the Fortune Arterial dollfies!
Volks has decided to continue their eroge based dollfies with August Soft’s latest work, Fortune Arterial.
Two dollfies from the series has been released at the Hometown Dollpa Kyoto 5. Click on the images to go to their respective sites: 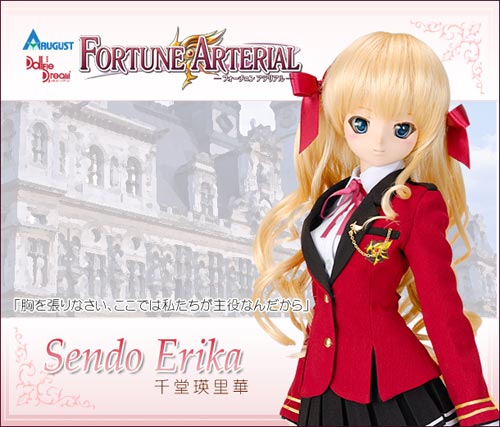 Here we have cheery Erika, I love this one and I’d buy it if I had the money at the time… The uniform looks gorgeous as well, I’d much prefer this than Yuki Nagato’s but oh well ^^; 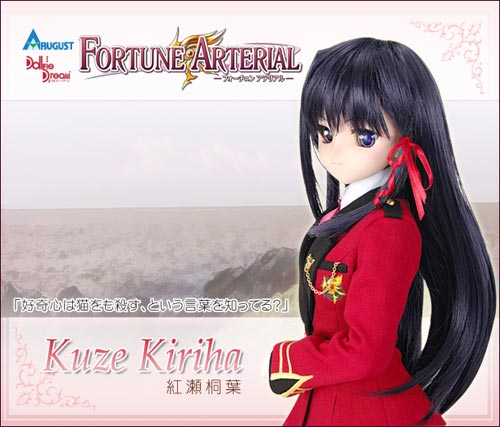 And here we have Kiriha, her beautiful black hair is so appealing to me, along with her sexy black stockings compared to Erika’s socks.

This isn’t the first time Volks has done an August Soft game dollfie interpretation either, their earlier works can be seen at the å¤œæ˜Žã‘å‰ã‚ˆã‚Šç‘ ç’ƒè‰²ãª -Brighter than dawning blue- official site.
Both images are from their official Volks site.

Next up is the Super Robot Wars series!
For those who don’t know, the SRW series has been around for quite some time, featuring various mecha shows such as Getter Robo and Gundam separated into two distinct categories, Super types, and Real types. With the series, there are “original” characters not from an existing anime/game, and they’ve grown so popular that they’ve spawn their own game, Super Robot Wars Original Generations. The featured dollfies are two characters from the SRW original cast, both were sold at a special event on 3rd May 2008. 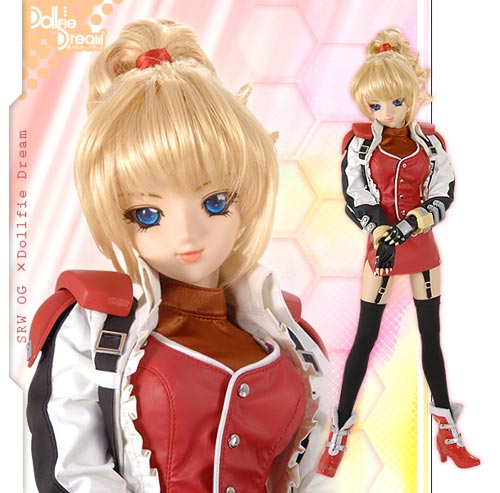 A mature looking dollfie, for those who like their women a lil more experienced~ This is one of the few Dollfie Dreams I’ve seen that has a fairly visible lip, making her look more like a Super Dollfie. 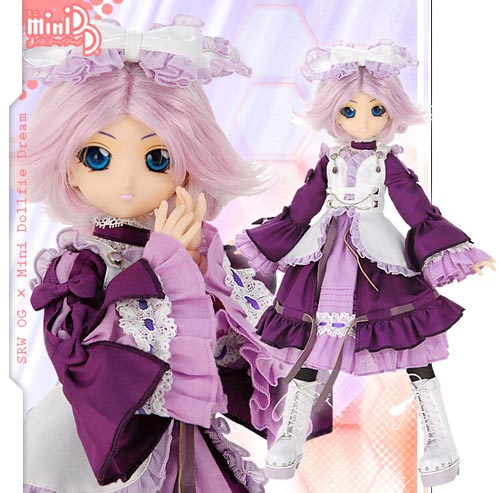 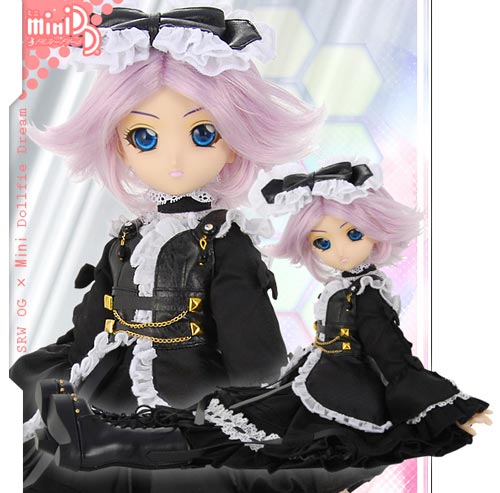 LatvnyÃ§, or Latun, or Latune, or Latourni, I don’t know…
A new addition to the Volks MiniDD series. While I adore the character, I feel that the dollfie doesn’t quite feel right =/ But as always, the clothes are beautiful~

And here we are, Saber, the bane of my dollfie hobby. Ever since she was announced I was killing myself at the thought of actually regretting that I bought Evelyn, the Yuki Nagato DD. The feeling has passed, though I still wish I had money for such a extravagant Dollfie. As far as I know, this Saber is the most expensive one yet, not to mention her box is also quite unique, putting aside the uniform look of the dollfie boxes for a more elegant and stronger box to carry all her gear, and believe me, she has quite a bit. Saber was first released only a month ago at the Dollpa 19 event on 27th April 2008. She was also released at the Dollpa 19 Afterparty event only a few days ago on 17-18th May 2008.

Here are some scans I did from the Dengeki Hobby magazine… or was it Hobby Japan magazine?…I forgot OTL, was scanned a few weeks back for the Den of Angels forum (go here for lots of info!) 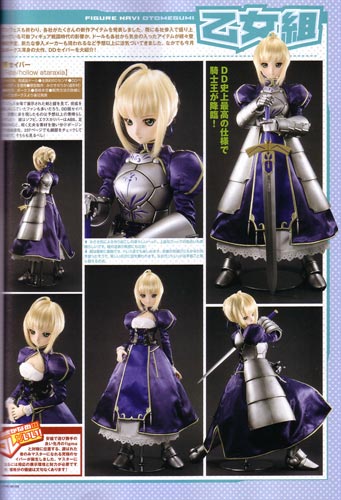 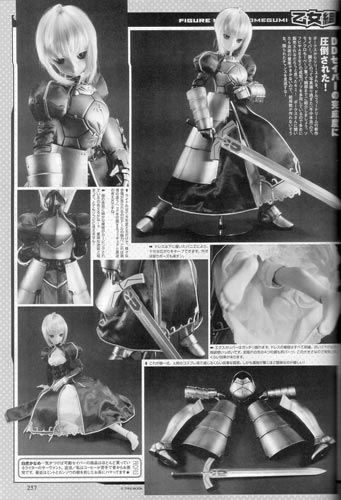 Volks have also released 2 clothes set for Saber, the holiday dress and the maid dress. For more info you can visit the official site at:

There is one owner that is a very happy and poor one now, you can visit their blog to see much more photos of Saber in her brand spanking new box, along with her clothes and accessories! Quick! Go to KitsuneSuki!! NOW!

Well, there’s the lil post on the new Dollfie Dream releases, I’m not sure if any of you will be able to buy, or even find, the above dollfies, but I wanted to let you know what Volks have been up to :3