I was contacted a few weeks back by Tokyo Otaku Mode about helping them out with some feedback. Some other bloggers were also contacted too :3

I wanted to say thank you for all the lovely presents. A lot of advertisement material was in the package, but I LOVE these pamphlets and have a whole stack of them from my trips to Japan :D 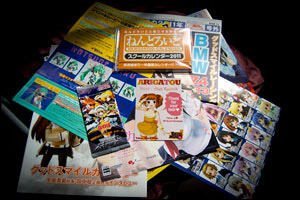 There’s a bunch of flyers and advertisement posters from various things from figma releases to an ad of the PhotoKano game for PSP. They included a nendoroid calender and a pack of Weiss Schwarz cards….unfortunately I play Lycee and not Weiss Schwarz ^^;; They also included a personalised thank you photo which was very touching :3

4 thoughts on “Thanks Tokyo Otaku Mode!”